What Visual Search and Video Search Mean for Music Businesses

Visual search is about to reshape worldwide commerce, according to some experts. This new frontier in searching is still foreign to many retailers – in fact, most people don’t even know what it is – but we’d all better get up to speed fast.

Generation Z – the group young people who are becoming the consumers of tomorrow – is ready for fresh styles of image-focused buying. One study found that 69% of them would buy something directly from a social media picture and three-quarters are excited about new formats like visual search, video retail, and subscription services that offer picture-based ordering.

What is Visual Search?

Visual search uses images, instead of words, to trigger searches. In a complex search style that combines elements of artificial intelligence and the power of image-savvy search engines, visual search provides photo/video results.

While browsing the websites and social media, visual search allows us to make connections through images. Let’s say you’re scrolling through Instagram and you like the t-shirt your favorite drummer is wearing in a photo. Visual search allows you to click on the shirt – or hover on it, or take a screenshot – and search for one just like it across the web.

In this example, the shirt brand might offer to sell it to you, or you might see an ad for Wal-mart’s version of the same shirt. Google or Amazon or a million other channels could show you similar items they have to offer.

Here’s why it works so well: Humans are visual searchers by nature. When we look out across the world, we spot things that are eye-catching: a squirrel, a butterfly, a fallen tree. If we’re looking for something specific, our brains will try to match what we see with a memory pattern – like when we’re scanning across a crowd of people to find our best friend.

The technology behind visual search has actually existed since the early 2000s. But mobile phones had to catch up. Now that many phones have huge banks of memory and unlimited data plans, visual search is taking a big leap forward.

As a music retailer, you’re probably getting the idea that visual search could be a big boon for your business. Imagine someone seeing a picture of a guitar somewhere online, doing a visual search, and being presented with your location/website to go buy it.

This is already happening in some corners of the retail world. Target formed a partnership with Pinterest, called Lens, which allows people to start from a picture of any item and use the power of Pinterest/Target to locate and buy it instantly.

Tommy Hilfiger, the fashion brand, introduced visual search as a component of its 2017 line of clothing. This makes it easier for Hilfiger fans to spot people wearing their clothing – in print, online, and in real life – and buy it, guided by a chatbot.

Video search is very similar to visual search, but it uses videos instead of photos. In the example we used earlier – where you liked the drummer’s t-shirt in an Instagram photo – you could spot the shirt in a YouTube video and use the same process: click, get results, buy.

This is what’s sending shockwaves through the music retail industry. Every time a music video is viewed on YouTube – which happened a mere 3 billion times last year – it’s an opportunity for retailers to sell something seen in the video or similar to it.

In fact, now that  “official video” giant Vevo has merged with YouTube, many experts are predicting an explosion in music video search. The deal means Vevo gave all the official music videos for the world’s biggest artists to YouTube. And who owns YouTube? Our old pal Google.

Visual search is very exciting, but it has some inherent challenges. It’s easy to understand how it works with something like a guitar, but what about guitar lessons? How do people search for services instead of products?

The answer is: So far, not very well. Visual search is very object-based and generally isn’t adept at picking up on more abstract ideas behind the images.

In early test studies, retailers with a finite list of tangible product offerings – like clothing companies – had much more success than those with a flexible set of personal services – like insurance companies.

Demographics are also a challenge. Generation Z and Millennials, because of their lifelong connection to cell phones, have a natural affinity for visual search. For Gen Xers, Boomers, and older groups, the technology isn’t quite as intuitive.

At least for a while, visual/video search isn’t expected to overtake old-fashioned text-based Google searches. (Of course, they both have competition from voice search, which is something else entirely. Think Alexa and Siri.)

If you’re a hometown music retailer, you might be reading this and wondering whether visual search is really going to impact your business. It’s gee-whiz cool, but is it profitable?

They’re seeing a 20% to 40% month-over-month jump in use of visual searches. Although they won’t disclose sales numbers, they’re incorporating the technology into several new Hilfiger brand launches, which is a sign it must be working for them.

Pinterest is reporting fast growth in its retail-related visual searches too. It has quickly developed a Lens user base of 200 million people who conduct an average of 3 visual searches a day. So far, Lens’ top-searched categories are beauty, fashion, home, art, and food. It’s not a stretch to picture music on that list.

This period in visual search feels a bit like the early days of Amazon.com, when everyone wondered whether an online bookseller was really a big deal. Then – bam! – the powerhouse of Amazon reshaped almost every product retail category in the world.

We can’t answer with 100% certainty whether visual search will be the next most-profitable frontier for your business. But we think it’s a good idea to prepare for it and incorporate more photos and videos into your marketing plan. There’s no question music is becoming more visual and innovative, decade after decade.

If your mind is boggling at the concept of visual search, you’re not alone. Octave Media has helped lots of music retailers explore cutting-edge concepts and turn them into profitable channels. Connect with Octave Media now or download our free ebook, How to Reach New Music Retail Audiences. 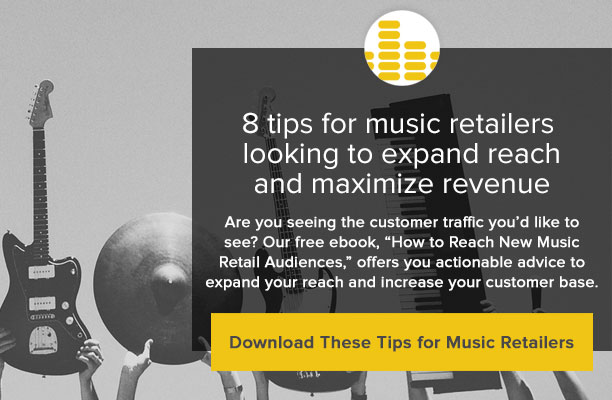